Play Age of the Gods: Kings of Olympus at Nordis Casino 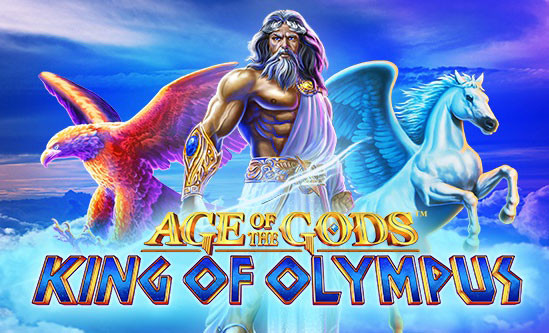 Age of the Gods: King of Olympus debuts five reels, three rows, and 25 pay lines. A game from the stables of Playtech, this slot variation centers on the King of Olympus, Zeus himself. This character comes power-packed as he wields a thunderbolt – no surprise as he’s the god of thunder. This Ancient Greece adventure is available on multiple devices, including iOS, Android, and PC.

Books that center on Greek gods and demi-gods make one thing obvious – Zeus reigns supreme. Even though external forces always try hard to usurp his powers, Zeus is practically unmovable. Well, he is not known as the god of thunder and lightning for nothing.

Age of the Gods: King of Olympus brings this mythological ruler to the reels in all his splendor. Playtech launched the game in June 2016, and it features a 3×5 grid setup with 25 pay lines. It comes with a decent RTP value that’s capped at 95.98% (the progressive jackpots make up for 0.99% of this figure).

While Zeus is the dominant character, he is not alone, there are other symbols that grant decent winning combinations occasionally. For context, high-paying icons are Pegasus, clay vases, the ship, harp, and the eagle. The low-paying traditional card symbols (A, K, Q, & J) round up the array of reel characters.

Like other Playtech offerings, the visuals here stand out as it resembles other games in this series. The reels are placed against a background showing multi-colored skies. As for the accompanying music, expect tunes that reiterate the presence of the gods.

The gameplay is unique, and easy to understand. To see how to make the most of gameplay, let us run through some crucial Age of the Gods: King of Olympus tips. 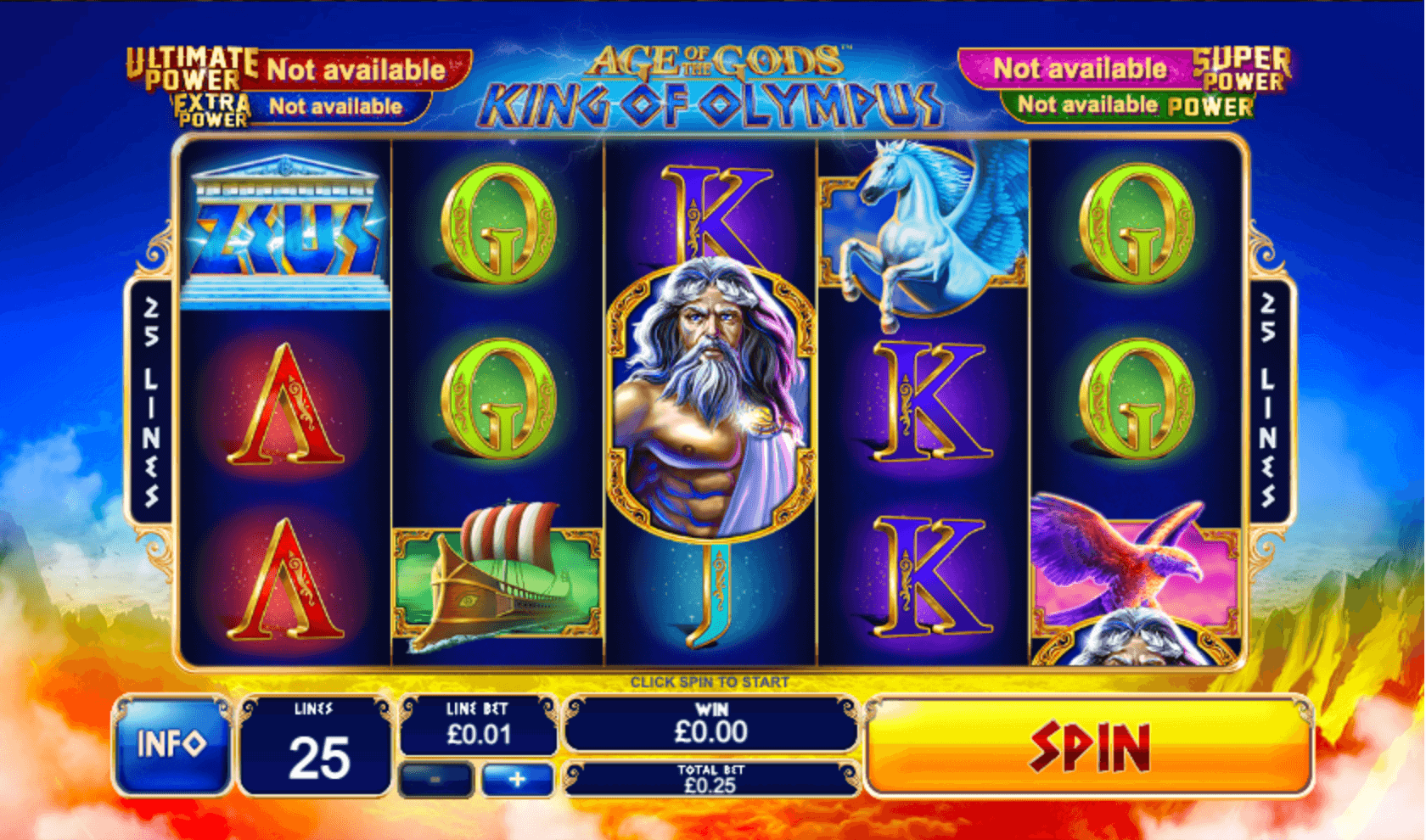 Can you take on the wrath of Zeus?

How to Play Age of the Gods: King of Olympus

Load this game at any of the top online casinos. Click the “Info” icon to see the different symbols and their payout values. To win, all a player needs to do is take spins and land a minimum of three matching symbols across the reels. To understand the bonus features, remain on the “Info” page and click the “>” or “< “arrows. Once clear on the settings of the game, it is now time to place a bet value that corresponds with the available gambling bankroll.

A preferred bet figure can be set by tapping the “+” and “-” icons at the down left corner. The values are within the scope of €0.25 – €250, but the max limit may vary among casinos. That said, a player should be able to wager these amounts on a plethora of them.

There’s also a “Turbo” mode add-on that works alongside the “Autoplay” feature. Activating it animates the reels, so they spin much faster.

To win a maximum of 18,000x a stake, the bonus features will have to be triggered, and this slot has quite a few of them. Let’s look at what they are.

Zeus is the Wild of this slot machine. An icon featured in a gold frame, landing Zeus across the reels, is vital as it helps to exchange all other symbols except the scatter, thereby contributing to a decent winning payout. Landing up to five in one go will secure 3000x a wager.

The scatter is represented by the “ZEUS” logo. When landing them across the reels, the player is eligible for up to 100x their stake. That said, getting a minimum of three triggers the Free Games Feature.

This bonus extra starts players off with 10 free spins. These rounds start with a 2x multiplier. After two spins, the multiplier value is increased by one and caps at 6x. When this feature ends, all wins made during this round are multiplied by the total number of multipliers obtained.

During the free games, a Zeus Wild lands on the middle position locks in place while the rest of the reels spin. It remains fixed throughout the bonus game, offering an added opportunity to trigger payouts. The only downside to this feature is that it cannot be retriggered. 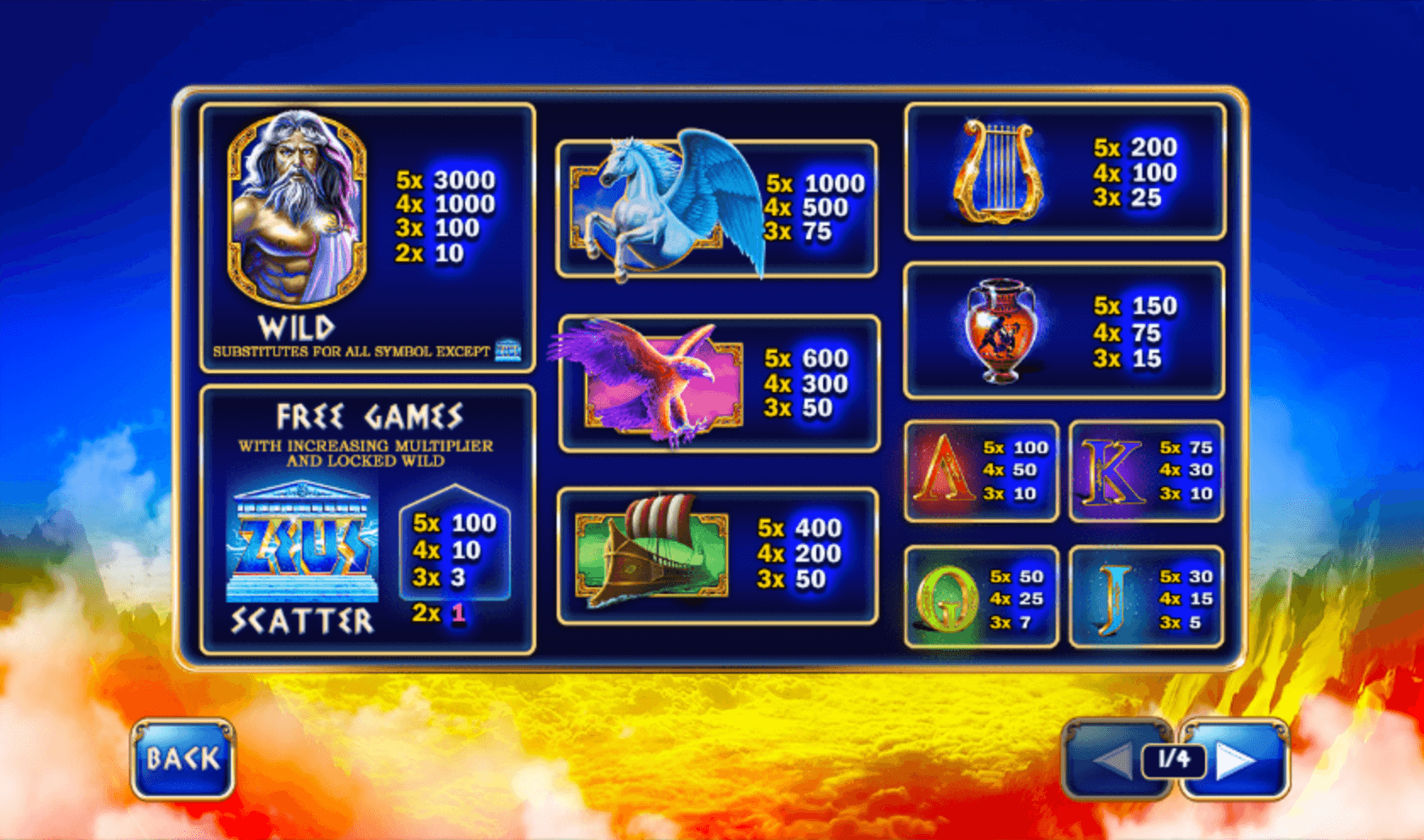 Age of the Gods: King of Olympus paylines

Age of the Gods Jackpot Feature

Since this game is a part of the Age of the Gods Playtech franchise, players can win four progressive jackpots. Once the Age of the Gods jackpot feature is activated, it takes the player to a separate screen to engage in a “pick me” game. Three matching jackpot icons must be selected to earn the corresponding progressive jackpot prize. Here are the four jackpot prizes that can be won: 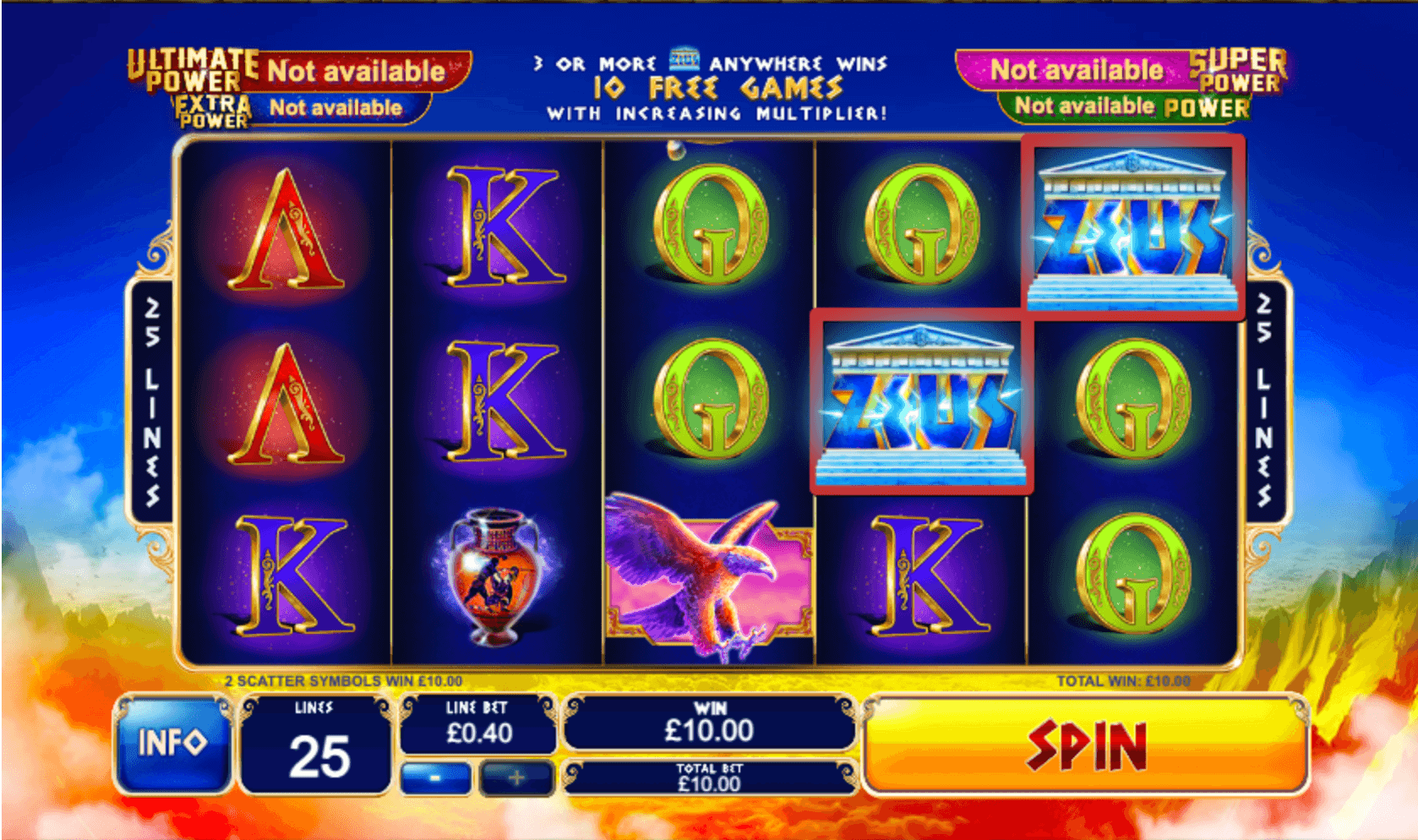 Free spins are only available once per play

If you are looking for a game that gives credence to the Greek god of Thunder (Zeus), Age of the Gods: King of Olympus is a perfect fit. It has a max win of 18,000x a wager, so this Playtech offering is as rewarding as it gets. However, a lot of luck is needed to win this, as it is only possible with a complete pay line of Zeus wilds combined with a 6x multiplier.

While some gamers might have some reservations about the non-reactivating nature of the Free Spins Feature, there are other Age of the Gods games to suit players. As with other Playtech offerings, this game can be found at a host of gambling sites. However, before wagering real money, remember that responsible gaming is a must.

By Checking Our Expert Reviews

We use cookies on our website to give you the most relevant experience by remembering your preferences and repeat visits. By clicking “Accept All”, you consent to the use of ALL the cookies. However, you may visit "Cookie Settings" to provide a controlled consent.
Cookie SettingsAccept All
Manage consent

This website uses cookies to improve your experience while you navigate through the website. Out of these, the cookies that are categorized as necessary are stored on your browser as they are essential for the working of basic functionalities of the website. We also use third-party cookies that help us analyze and understand how you use this website. These cookies will be stored in your browser only with your consent. You also have the option to opt-out of these cookies. But opting out of some of these cookies may affect your browsing experience.
Necessary Always Enabled
Necessary cookies are absolutely essential for the website to function properly. These cookies ensure basic functionalities and security features of the website, anonymously.
Functional
Functional cookies help to perform certain functionalities like sharing the content of the website on social media platforms, collect feedbacks, and other third-party features.
Performance
Performance cookies are used to understand and analyze the key performance indexes of the website which helps in delivering a better user experience for the visitors.
Analytics
Analytical cookies are used to understand how visitors interact with the website. These cookies help provide information on metrics the number of visitors, bounce rate, traffic source, etc.
Advertisement
Advertisement cookies are used to provide visitors with relevant ads and marketing campaigns. These cookies track visitors across websites and collect information to provide customized ads.
Others
Other uncategorized cookies are those that are being analyzed and have not been classified into a category as yet.
SAVE & ACCEPT